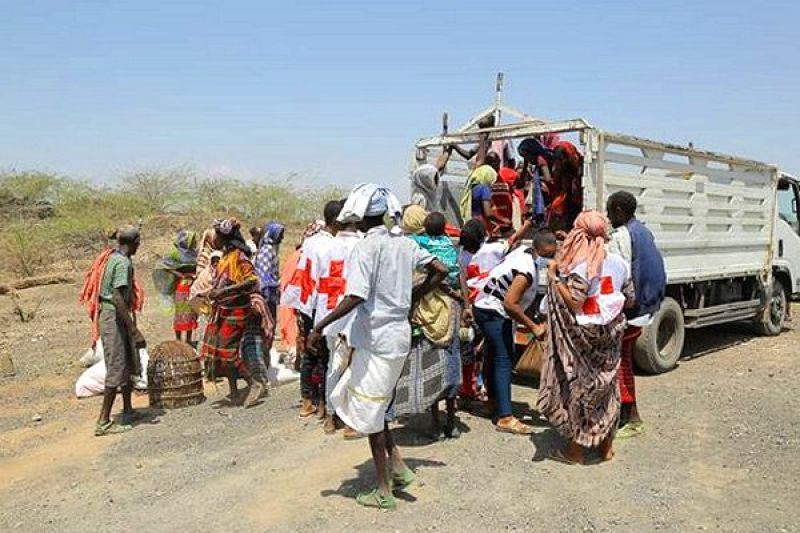 (This is an edited version of a story first published by the Netherland Red Cross 510 data team and the Anticipation Hub on Wednesday.)

The IFRC earlier this month announced that its Disaster Relief Emergency Fund (DREF) had approved an allocation of 350,000 Swiss francs for a new early action protocol for Ethiopia with floods as the priority hazard.

The Ethiopia Red Cross Society (ERCS) is the primary implementer, with support from the Netherlands Red Cross (NLRC) and its 510 data team, the IFRC, and the Climate Centre.

A simulation exercise in early March in the Awash river basin was conducted “to test assumptions and to see if the EAP runs as effectively as possible or if there are potential tweaks that can be made in the process,” said Sirak Temesgen, NLRC Regional Disaster Risk Reduction Delegate.

“The simulation was necessary to test whether the current early actions are actually relevant to the community.”

Once the trigger level was reached, the portal for impact-based forecasting – 510’s tool that integrates data and visualizes the impact a flood will have – sent an automatic message to the National Disaster Risk Management Commission (NDRMC); an intervention area map, which shows where the event is expected to happen, was provided also via the portal.

The district early warning committee specified (neighbourhood) kebele-level actions and assigned roles for sectors based on the NDRMC’s alert message.

On days three and four, the kebele committee developed a detailed implementation plan, including financial support from local micro-finance institutions under agreements made with the ERCS.

Red Cross volunteers went round communities with loudspeakers, and after the early-action threshold was reconfirmed anticipatory actions were set in motion.

Over the final two days logistics were mobilized and the implementation team assembled.

With the support of the river basin authority a bulldozer was deployed to the flood area for dike maintenance and to clear drainage channels, for example, while volunteers helped with sandbagging and provided shelter materials and cash to people expected to be impacted.

Residents and livestock were evacuated to high ground, a temporary shelter in the safe area was constructed, and drinking water was provided to the people in the evacuation zone.

It was later concluded that with a well-organized team and logistics it is possible to implement the flood EAP with a seven-day lead time, but some logistical gaps were identified and will be addressed in the next simulation.

The need for quick exploration of the potentially affected area one week before the event was stressed. Overall the simulation increased key stakeholders’ confidence in early action.

Although it was only a simulation, the activities were done in such a way as to make a real contribution to reducing flood risk in the area, from reinforcing weak riverbanks to building capacity and strengthening relationships among all the agencies and communities involved.

The involvement of 510 built confidence in the usefulness of good data for quick decision-making.

Residents being evacuated to safety in the March EAP simulation in Ethiopia. (Photo: NLRC)